For several years, Family Education & Support Services (FESS) has wanted to hire a person to oversee its many parenting programs.

In Jody Smetak, FESS found someone for the newly created position of Director of Education. Her background and experience are a great fit for the new position, says Executive Director Shelly Willis. And to Smetak, the job feels like the perfect fit.

“I have always wanted to be part of helping people change and overcome things,” said Smetak, 54, of Olympia.

Born and raised in Bellingham, she moved to the Thurston County area, where she earned a bachelor’s degree in psychology and master’s degree in counseling psychology, both from Saint Martin’s University in Lacey.

She became a licensed mental health therapist. Since 2009, she has worked for Community Youth Services, and since 2015, has been in a supervisory role for in the transition-age youth program for young people 15-25 years old.

She has been a licensed foster parent for seven years, caring for eight children during that time. She not only cares for the kids, but focuses on helping their parents, as well.

“My whole goal of fostering is to join with the parents,” she said.

She also has experience with FESS, teaching a specific parenting class called MRT. While that parenting program, which teaches parenting skills and stresses accountability, is good, she has gone beyond it by facilitating support classes “so parents can come together and support each other,” she said.

In her new post, Jody will help facilitate and sometimes train in specific programs like MRT (Moral Reconation Therapy®), the Domestic Violence class, or the Consider the Children class for parents going through divorce. She also will work on the QPR (Question-Persuade-Refer) suicide prevention program with FESS clinic director, Scott Hanauer, who she previously worked with at Community Youth Services.

She will be out in the community helping to promote FESS programs like QPR, which is offered online and has attracted people from all over the country and even in other countries. In addition to the benefits of the many trainings offered, FESS will work to generate more revenue to support current and new programs.

Jody also brings to the job a quality beyond training or background, and that is a passion for the work.

“I love what I do,” she said. “And I am really excited about joining everyone at FESS.” 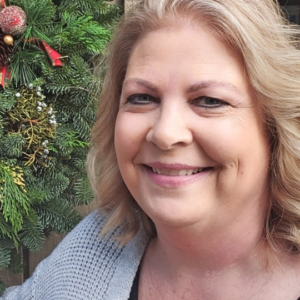