The pandemic has affected all areas of society, with early childhood education and childcare hit especially hard. But good news is coming out of the pandemic, as well, says FESS Clinical Director Scott Hanauer.

Even before the Covid pandemic hit, FESS Clinical Director Scott Hanauer was working with an organization called the Athena Group to do a research study on early childhood mental health.

When Covid hit, the focus of the group shifted strongly. “Much of what we talk about is Covid and how Covid is impacting little kids – their mental health,” Scott said. “There isn’t a meeting where it doesn’t come up.”

“Covid has had a negative impact, particularly on communities of color and high-risk families, such as those living in poverty or close to poverty,” Scott said. “Covid has had a direct impact on early childhood mental health and the (childcare) providers.” Vastly impacting the problem was the decreased lack of childcare, as centers closed and staff left.

“Hiring and retaining staff has been a big problem,” Scott said. “It’s a workforce issue.” Parents and others who might otherwise provide extra help at childcare facilities were not allowed to come in.

The pandemic created pandemonium within the system, especially for high-risk kids or communities of color. “The disparity gap became even bigger,” he explained.

Many single moms had to stay home. With that development, the great uncertainty about childcare and sudden lack of structure, among other factors, many of these children were adversely affected. Parents of children most at risk for behavior problems only saw their behaviors escalate, and already-stressed childcare providers could not cope with the most challenging children, who “were expelled or suspended at a much higher rate” than those with less risk factors.

Scott said the State Legislature provided good long-term news in the form of the Fair Start Act, which will give hundreds of millions of dollars and resources to build up a strong childcare system. “It is the first time in my career the Legislature has made an effort to support early childhood mental health,” Scott said. Dealing with potential mental health issues at a very early age can lessen the costs dramatically of paying for the results of not treating those mental health issues later in life.

The other piece of good news is that work and research on brain science with young people being performed the past two decades has paid off in the form of resources parents can use to work with their children more effectively.

Especially helpful is Vroom, an initiative of the Bezos Family Foundation. Vroom provides a wealth of information to parents. FESS is one of nine agencies in the state partnering with Vroom to increase awareness and use the Vroom tools in its parenting classes.

Vroom “gives parents ideas they can put into practice,” describes Marilyn Gisser of the State Department of Health, which oversees the Vroom program in Washington as well as the Essentials for Childhood program.

The work on brain science has led to simple tips and activities for parents, such as how to get down on the floor and play with a child. Parents or others can download an app to get daily tips on activities and ideas they may want to try.

“Most of the tips use what you have at home,” she said. “They are interactive between the adult and the child.”

As with Scott, she said “there’s so much evidence that investing in the first five years will pay off in so many ways.”

Kassie Trotter, FESS director of the Parent-Child Assistance Program, said, “This has been a really helpful program.” The program is aimed at moms working on substance abuse issues so they can have their child returned to them.

Vroom is “one tool that can be used in a lot of different ways: parenting classes, the WIC (Women, Infants and Children) Program, pediatric providers and connecting to other service providers,” Marilyn said.

She summed it up this way: “It’s pretty cool.”

You can find a wealth of information at Vroom and at Washington State ACES Action. 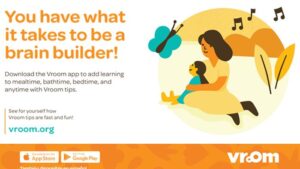