The loss of a Good Friend

FAMILY EDUCATION AND SUPPORT SERVICES MOURNS THE DEATH OF CARRELL SIMMONS, A MAINSTAY OF THE AREA ORGANIZATION

OLYMPIA, WA – The South Puget Sound area lost a valuable friend to parents and children this week with the death of Carrell Simmons, Tenino, who had been the office administrator for Family Education and Support Services (FESS), a Tumwater-based, parent-centered organization that serves hundreds of area families.

FESS works to build healthy environments for children and families, especially those most vulnerable, by offering a broad range of support services in Thurston, Mason, Lewis, Pierce and Grays Harbor counties.

“She was with us from day one, really from before day one,” said FESS Executive Director Shelly Willis. “She helped people find childcare and to navigate the childcare system,” Willis said. “She was a fount of information.”

Simmons, 68, started her career in child welfare by providing childcare. She then joined the local Child Care Action Council.

“She knew trauma-informed (care) before it was trauma-informed,” Willis said of the relatively new method of treating children who have experienced trauma.

And when people came to FESS, Simmons often was the first person they talked to – leaving a positive and lasting first impression.

“She just had a way that made you feel safe, warm and supported,” Willis said.

She recalls a new kinship caregiver coming to FESS to navigate the paperwork for a grandchild who had come to live with her. Carrell told her she would have to go to court and pay a fee – money she did not have. Carrell loaned her the money to start the process.

That kinship caregiver is Lynn Urvina, who for many years has been Family Education & Support Services’ Kinship Director in a nationally honored program that supports those who are raising a relative’s children.

Simmons was preceded in death by her husband Phil in 2017. She has two children. However, many children came into their lives as international exchange students who lived with the couple – “too many to count,” Willis said.

Part of that undefinable glue that helps bind a community and organization together, Simmons’ calm, humble presence will be greatly missed, both by FESS and by many in the community whose lives she touched, Willis said. 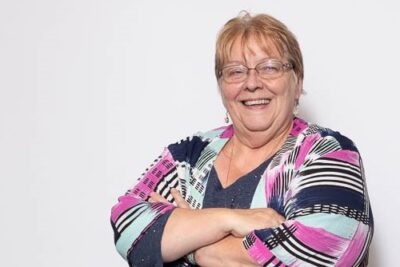