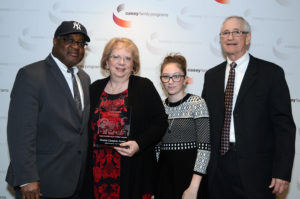 There are some people you meet who you can tell were made for their job. Lynn Urvina is one of those people. She works as the Kinship Navigator for Family Education and Support Services, and she recently won the Kinship Caregiver Award for the 2018 National Casey Excellence for Children Awards.

As a Kinship Navigator, Lynn supports caregivers, often grandparents, but sometimes aunts, uncles or older siblings raising children whose biological parents are otherwise unable to care for them. She knows what its like to be a kinship caregiver, because she has raised her own 14-year-old granddaughter Tara from the time she was 11 months old.

“One part of our story that’s different is that we didn’t know she was born until she was 11 months old,” shares Lynn of her granddaughter. “We started offering to watch her as much as we could. Even our older daughter offered to watch her occasionally.”

By the time Tara was a year old, she was living with her grandparents fulltime.

Lynn and her husband Lars started with custody through the court system, then officially adopted Tara when she was 8-years-old. “We always wanted to adopt, but we weren’t going to do that until both parents agreed,” says Lynn.

With four adult children now out of the house, Lynn and her husband Lars raised Tara as an only child. “Our older children are now her siblings, and her parents have gone on to have other kids,” Lynn shares. So including adopted and half-siblings, Tara has nine siblings, another unique feature of their family story.

Lynn has a big family, with 14 grandchildren – 15 if you include Tara – and one great-grandson. She is glad to have most of her family living within the state. She says the grandkids love getting together often, and that her adult children are best friends. “They have been very supportive of us raising Tara, and have been a great support since my husband passed away last May.”

That’s why her work as a Kinship Navigator for FESS is so important, because grandparents and kinship caregivers need that support. “A lot of people don’t realize, first of all, how many others are in the same situation, how common it is. That there are places they can turn for help.”