Through QPR training, you can help save a life.

Scott Hanauer, clinical director for FESS, tells a personal story when he is training on the suicide prevention model known as QPR (“Question, Persuade, Refer”).

He received a message one night from a friend who feared one of his friends was close to taking his own life.

Scott had taken the QPR training. He called the man and was able to talk to him and persuade him to wait until Scott could get there to talk to him in person. This was no easy task. Scott lives in Olympia; the man in distress lives in Seattle. Scott drove there, talked to him and took him to the hospital emergency room, ER, where he spent 13 hours with him. The man eventually got help. He did not take his life.

Scott says QPR is evidence-based, meaning it has been shown through rigorous testing and data to be effective at suicide prevention.

“It’s kind of analogous to CPR.”

He added: “If we have the courage to ask the right questions, (individuals) will be far less likely to complete suicide. If we can intervene within 10 minutes, we can stop it.”

The Spokane-based QPR Institute says, “Suicide is a preventable cause of death, and positive action can help save a life.”

As the community and the world continue to struggle through the pandemic and its various traumatic effects, it’s more important than ever to learn what to do when someone wants to take their own life.

You do not have to have special knowledge to help save a life, Scott stresses.

The statistics about suicide are grim, and it affects not only adults but also children and youth.

The QPR trainings teach you about nine high risk factors, everything from mental disorders to lack of social support. By taking the training, which takes just 60 to 90 minutes, you can learn what to do to reduce suicide rates.

You learn about myths (those contemplating suicide are not more likely to take their lives when someone asks them about it, for example).

The training teaches you to listen for indirect and direct verbal cues or life-changing events that may lead someone to contemplate suicide.

You are taught how to prepare to ask questions and the best questions to ask, as well as questions not to ask. The QPR Institute says, “how you ask the question is less important than that you ask it.”

Once you are talking to the individual, you want to persuade them to get help. The training shows how to do this, and stresses that the best way to connect them with help is to go with them to start the process.

Scott says it is also important they know what resources are available.

Here are a few: 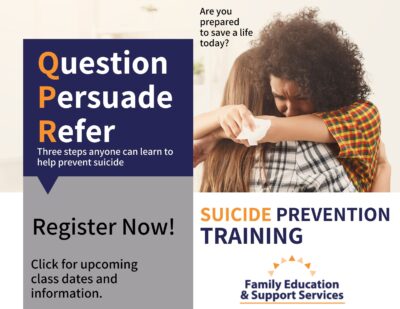 For more information on QPR and a list of upcoming trainings visit www.familyess.org/QPR