If you see pinwheels twirling in the breeze on the State Capitol Campus in Olympia or around Thurston, Mason and Lewis counties this April, it is because the pinwheels are a visible symbol of Child Abuse Prevention Month, observed each April.

“They are a positive symbol of a serious problem,” said Shelly Willis, executive director of Family Education & Support Services.

Since 2008, Prevent Child Abuse America has been using the pinwheels to draw attention to the vital issue of child abuse.

Figures from 2018 compiled by the American Society for the Positive Care of Children paint the grim picture of child abuse in America:

So why were pinwheels chosen to highlight the issue?

Pinwheels for Prevention was an outgrowth of Prevent Child Abuse America

“What our research showed, and what our experiences since then have reinforced, is that people respond positively to pinwheels, which represent childlike whimsy and lightheartedness and our vision for a world where all children grow up happy, healthy and prepared to succeed in supportive families and communities.” –Prevention Child Abuse America

“A pinwheel is a childhood symbol – it represents a time when things were simple and natural. Its bright colors convey optimism and vitality; in use it demonstrates the ready transformation from inertia to energy.”
They added, “Pinwheels are found all over the globe and retain their recognizable shape and function from culture to culture. In Chinese culture, for example, the pinwheel signifies “turning one’s luck around”; the pinwheel figures prominently in Chinese New Year celebrations where it represents good luck, longevity, health and prosperity.”

As the former State Department of Early Learning, now part of the Department of Children, Youth and Families (DCYF) brainstormed ideas to highlight the issue, the idea of pinwheels came up, said Jenni Olmstead, prevention partnerships specialist with DCYF. “We wanted to capture their eyes and spur their imaginations,” Jenni said.

Family Education & Support Services and DCYF are encouraging businesses, organizations,  as well as individuals to participate in Pinwheels for Prevention by planting Pinwheels of Hope! .

Contact Family Education & Support Services at 360-754-7629 or visit www.familyess.org/pinwheels for more information on our local Pinwheels for Prevention campaign. 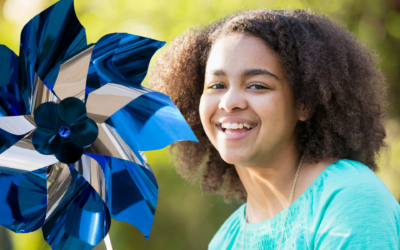 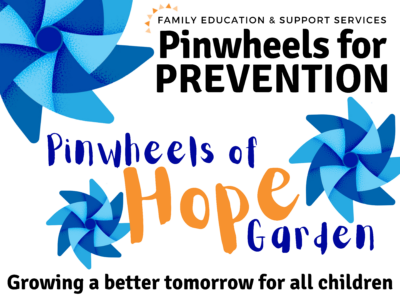