Best advice for dads? Share your values, your attention and your love

Being an involved and active dad is all about your attitude, says Keoki Kauaone, who for five years has been leading classes for fathers in his role as the fatherhood engagement director for FESS. Keoki estimates he has taught about 500 dads, with ripple effects to 1,500 children, since he began.

Children raised by parents with an authoritarian attitude – “do it because I said so” parents – “are more susceptible (as adults) to people telling you what to do,” Keoki explained. “Your mindset has to be ‘I want to get my child’s cooperation’ because they believe it is the right thing to do.”

This attitude also will help them stand up to peer pressure as they grow, he said.

Establishing that kind of relationship with children is also a kind of reward because it lets them know you are really listening to them and will seriously consider their thoughts when you are making decisions as a parent.

Dads should have the mindset that they are really enjoying their time with their kids.

“It is nurturing for their brain and for us to have really happy memories. People remember experiences more than what was said, so you can create those memories,” he said.

Keoki also said dads should remember the immense value of time spent with their children.

Two different kids of parents going through divorce, for example, might turn out differently – one making good choices, the other engaging in more risky behaviors – depending on how much time they spent with their father.

“There is a lot of value to the time we spend with our kids,” he said.
Keoki provided this link to a short scene from The Flash show in which The Flash’s foster father gives him a clear perspective about parenting and how to “lead with love” as a parent.

Like his foster father Joe, says, “You help them know who they can be when they grow up …” 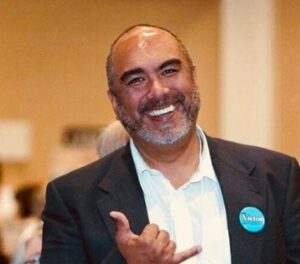